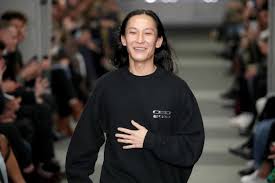 Hello guys, today I want to talk abut one of my favorite designers. I followed him on Instagram a while ago, but I have become a really big fan recently. So I will ‘present’ him to you.

Alexander Wang is an American designer born on the 26th of December 1983, in San Francisco, California to a Taiwanese house hold, but he has confirmed that he cannot speak Mandarin Chinese. He did a summer course at Central Saint Martins when he was 15 and moved to New York to study at the Parsons School of Design, but he left the program after two years, without graduating, so that he can start his brand.

He started his fashion brand in 2005 and became more popular after he won the CFDA/Vogue Fashion Fund in 2008.

In 2014, he collabed with the Swedish brand H&M to create a collection for both men and women.

In 2016 he became CEO of the Wang brand succeeding his mom Ying Wang and his sister-in-law Aimee Wang. Later that year he was awarded $90 milion in damages after successfully suing 45 defendants running 459 websites that sold counterfeit goods bearing his name.

In 2018, Wang partnered with Trojan to release a limited edition “Protect your Wang” capsule collection in support of the LBGTQ community and to celebrate Pride.

Hope you enjoyed this post. If you did, suggest me some other designers to talk about. Have a great day,